‘We want to make sure immigration policy represents who we... 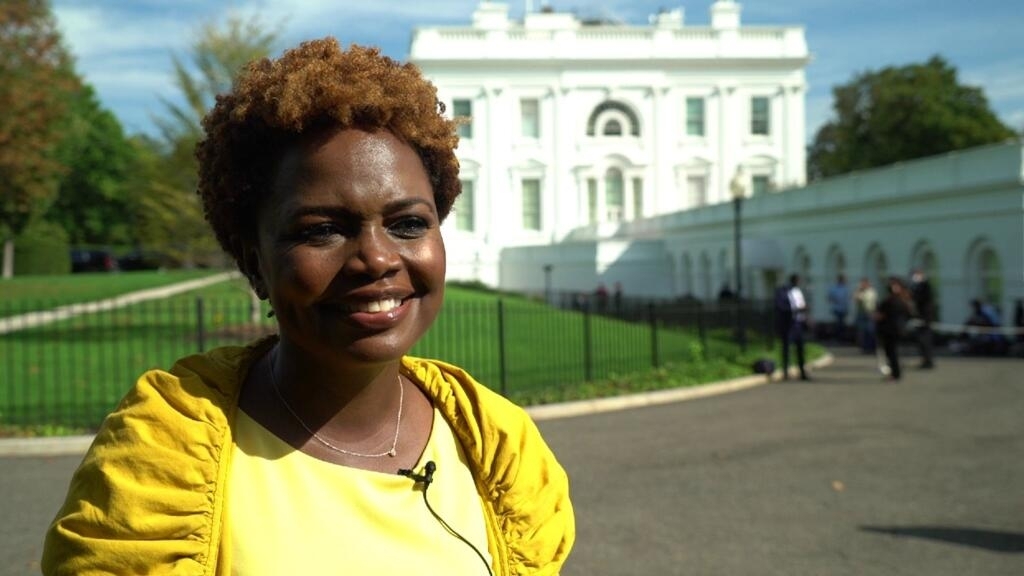 Karine Jean-Pierre made history in May by becoming the first openly LGBT individual – and only the second Black woman – to lead a White House press briefing. In an interview with FRANCE 24, she discussed her upbringing, the Haitian migrant crisis and the recent diplomatic crisis with France.

Deputy Press Secretary Karine Jean-Pierre, 44, often briefs reporters aboard Air Force One and occasionally takes the podium in the briefing room as part of the all-female senior communications team at the White House. She is the first openly gay woman to deliver the White House press briefing and only the second Black woman in history to serve in the role.

Jean-Pierre was born in Fort-de-France, Martinique, where her Haitian-born parents landed after fleeing the dictatorship of Jean-Claude Duvalier. She spent several years in France as a child before her family settled in the United States, where she was raised in Queens, New York. The daughter of a cab driver and a home healthcare aide, Jean-Pierre has worked on many Democratic campaigns and in grassroots activism.

In her memoir “Moving Forward: A Story of Hope, Hard Work, and the Promise of America” (2019), she discusses her struggles in early adulthood: She is a survivor of sexual abuse, has suffered depression and attempted suicide. She also chronicles her path from local New York politics to working in the Obama White House.

In an interview with FRANCE 24, she discussed her upbringing, her political aspirations, the Haitian migrant crisis and Washington’s recent diplomatic crisis with France.

Your story embodies the American dream. How do you feel about that?

I think that is what the United States are all about – coming here as an immigrant, being able to reach the American dream. That is something that is really part of the fabric of this country. I think as someone whose parents were born in Haiti – I was born in Martinique – and my parents came here with nothing. And to be able for them to look at me, 30 years later, to say, “Wow, our child has made it” – it is something that is incredibly special and that I carry with me even as I’m here at the White House every day, remembering how I got here, how my parents got here, and how I am part of that American dream.

In your memoir, you talk about mental health issues as well as personal issues – the fact that you were abused sexually, that you attempted suicide and your homosexuality. Why was it important for you to be so open about it?

Why did you decide to get involved in politics?

As I was thinking about how I was going to make a difference, the first 12, 15 years of my life – at least in school – I thought I was going to be a doctor. I think … immigrant parents and families think that is what is going to make you succeed, so that’s what I thought I was going to be. And then I realised that was not the path for me, but I knew deep down I wanted to make a difference. And when I went to grad school that’s when I had really wonderful folks that I can learn from, amazing mentors, and they said, ‘Hey, if you want to make a difference, why don’t you go into politics, change policy, really be part of how [laws] are created, policy is created?’ I thought, OK, that’s something I wanted to do. Also when I was in grad school, it was the first time I went to Haiti. All of that kind of came together. This is why I always tell people, follow your passion, don’t listen to the noise and people trying to guide you in your life. Figure out what it is that makes you happy and go for it.

Is it important for you to be one of the first Black female spokespeople and the first member of the LGBT community to be in that role?

I don’t think about it, to be quite honest. I know I stand on so many shoulders, so many people that came before me. I would not be here without my parents and without so many people. There was, before me, the press secretary under George W. Bush (Judy Smith, who served as deputy press secretary to president George H.W. Bush) – I want to make sure I lift her up as well. But what I do say, and I said that the first time I was able to be behind the podium, is that representation matters and that’s something that the president understands. That is something that he clearly took action in making sure that not only we have smart and good people here, but that his administration represents this country.

How does it feel to be at the White House now, after so many years of activism and campaigning on the road?

Yes, I’ve had the opportunity to live in many different cities, many different states. Activism was a big part of my life the last four years and now I think I have an opportunity to be part of history in different ways. One of them is being able to talk about the work that we are making here, that is big, that is going to change people’s lives, that is going to make fundamental changes in decades to come. I think this is the place to be.

You are part of the first all-female communications team of the White House. How does that inspire you?

I think what we are doing here, it’s not just a wonderful representation, it sends a message in this country but also globally.

I think it’s important to hear our voices. And we’re diverse within our own leadership as well. It sends a positive message to young women and young boys to say, ‘Look, you can be here at the White House as a mom, as an immigrant, as someone who has so much diversity and so much background.’ I think it says a lot about President Biden making sure every voice matters and how the makeup of your departments matters as well.

You talk a lot about your Haitian origin in your biography “Moving Forward”. There was recently a crisis at the border with Haitian migrants. How did you feel about it?

I think we all felt such pain when we saw what happened at the border with, sadly, some of the officers (who were filmed using force to push back migrants) – those officers do not represent all of them. It was just a few officers and it was heartbreaking. The president spoke about it, the vice president spoke about it, they denounced it and said this is, basically, not who we are. And I think for many people in this country – especially African-Americans, Black people – it reminded them of a time that was incredibly painful, that is part of our history, that is part of this country’s history and I think that’s why it hits so hard when you think about slavery days and enslaved Black folks, when you think about the Jim Crow years. It was very hard to see, and the president spoke out about it, he was very clear that it was not acceptable and so to me that’s what matters: The fact that the two people that I work for, essentially the president of the United States and the vice president, stood up and were very strong about it and said this is not how we should be represented and that this is not how we should be treating migrants. This is not how we should be treating people. What we saw was incredibly disturbing, so we should speak out against that. President Biden took ownership – I think that’s what leadership is. That’s very important to me and to so many others.

The administration decided to send back hundreds of migrants in planes, but these people often return to misery and sometimes violence. How did it make you feel?

This has been something that’s been in place for the past year. We’re trying to work through an asylum process, we’re trying to fix things that were broken from the last four years. One of the first things the president did was to put forth an immigration policy, and we’re going to continue to work with Congress and encourage them to pass immigration reforms that are critical and important.  We want to make sure that the immigration system here is fair, decent, and that it represents who we are as a country. We were just talking at the top about my American dream story and that’s who we are – we are a country of immigrants, of people coming from different corners of the globe. Right now we have to figure out, how do we fix such a broken system? That is something the president has made a priority.

What does Biden expect from his meeting with French President Emmanuel Macron during the Group of 20 summit on October 30-31?

I think they’re going to have a good meeting. We saw them together for the G7 and it was very friendly and they’ve gotten to know each other and they’ve had a couple of phone calls. They’ll have a real conversation and they’ll talk about things that matter to them and to their countries. It will be a very important conversation.

Was the administration surprised by France’s reaction during the submarine crisis?

It’s not for me to say. I’m not going to speculate on any of that. The president does indeed value that France is our oldest ally, it is the most important partner that we have. The Biden-Harris administration wants to make sure that that relationship is deepened and continues to find ways to work together as we move forward dealing with so many global challenges.

Did the Biden administration feel that France overreacted?

We’ve got to move forward. National Security Adviser Jake Sullivan was in Paris recently, Secretary [of State] Antony Blinken was in Paris. I think that shows how deeply important the relationship with France is by having high-level officials go there recently. And then the president is going to have his meeting [with President Macron]. That’s what we want to focus on – how do we move forward, and continue to work on this relationship and deepen the relationship that we have with France?