‘We are headed into the unknown, but we will not... 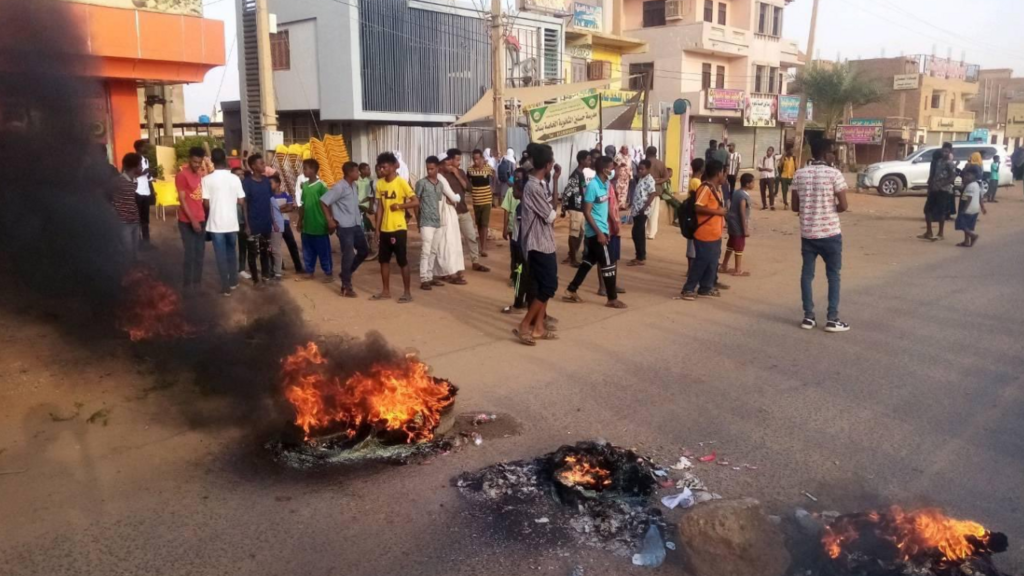 The situation in Sudan has deteriorated after security forces arrested the prime minister and other ministers and members of the Sovereignty Council, which made up the civilian government in the country, on October 25. The army fired into the air to disperse the mass of protesters who took to the streets to denounce the “coup d’état”, leaving several people injured, according to residents’ accounts.

Unidentified gunmen arrested several Sudanese leaders early on October 25, a government source told AFP. The internet was also cut off across the country, Sudanese residents confirmed to us by phone.

General Abdel Fattah al-Burhane, head of Sudan’s transitional authorities, announced the dissolution of the government and the Sovereignty Council, and declared a state of emergency.

At the beginning of this video, we hear gunfire ringing out. “Live ammunition on the airport road, October 25,” a protester shouts.

In the morning, after learning of Prime Minister Abdallah Hamdok’s arrest, protesters took to the streets of Khartoum and Omdurman. They chanted “No turning back”, a slogan that harkens back to the era of Omar al-Bashir’s dictatorship, overthrown on April 11, 2019 after four months of widespread protests.

Security forces used live bullets to disperse protesters who were trying to reach the army headquarters. The demonstrators burned tyres in the streets, as seen in videos published on social networks, despite heavy internet disruptions.

At least three people were killed by gunshot wounds in the crackdown, according to the Central Committee of Sudanese Doctors, and more than 80 were wounded.

At mid-day, the army – with the help of the Rapid Support Forces (RSF) – had cordoned off bridges and main roads in Khartoum to prevent protesters from reaching the army headquarters. The video below shows security forces stationed outside a petrol station, with smoke rising in the distance and protesters chanting, “The army belongs to Sudan, the army does not belong to Burhan”.

This video shows security forces stationed outside a petrol station, with smoke rising in the distance and protesters chanting, “The army belongs to Sudan, the army does not belong to Burhan”.

‘That was the saddest thing to see: Sudanese people facing off two years after the revolution’

Fatma (not her real name) is a journalist in Khartoum.

I live in the neighbourhood around the airport in Khartoum. I didn’t dare to go out today. From the window,  I can see the smoke from burning tyres. I hear shots from automatic weapons and stun grenades, coming from the army headquarters.

This morning, protesters crossed the bridge leading to the army HQ, and the army shot in the air to disperse them, causing several injuries.

There were also some brief exchanges of projectiles between protesters supporting the revolution and pro-army protesters [Editor’s note: supported by the governor of Darfur, Minni Minawi, and Finance Minister Gibril Ibrahim, both of whom represent armed groups and have called for the current government to be dissolved]. That was the saddest thing to see: Sudanese people facing off two years after the revolution.

There was an atmosphere of fear this morning. Schools sent SMS messages to parents saying they couldn’t allow students in class today for security reasons.

Journalists are now very afraid, after the arrest of some civil society leaders. There were warning signs of this coup d’état, and restrictions on journalists’ freedoms came well before today.

This video shows members of the Rapid Support Forces (RSF) beating passers-by with sticks at the edges of the protests, as gunfire rings out.

The pro-military protesters, who have been campaigning in front of the presidential palace since October 6, prevented journalists from filming their sit-in, sometimes with force. They even blocked international medias like the BBC.

It’s been two weeks already since the intelligence agency had issued a travel ban to several political figures from civil society, including a member of the Security Council, Mohammed al-Fakki Sueima, and an aide to Prime Minister Abdallah Hamdok.

The Industry Minister, Ibrahim al-Cheikh was arrested at his home in the middle of the night, humiliatingly. He published a Tweet just before his arrest, saying “Soldiers are storming my home”. Images of his arrest were published on social networks.

Most of the stores are closed, the main roads have been closed by the army, and the internet was cut. In Sudan, a lot of things need the internet: making a doctor’s appointment, ordering a taxi, doing shopping. The country is at a standstill, but the Sudanese people haven’t given up. They have descended massively into the streets to protest against President Abdel Fattah al-Burhan’s announcement to dissolve parliament at the beginning of the afternoon.

We are headed into the unknown, but we will not surrender. We will never let them take our revolution.

Mohammed al-Assam, one of the leaders of the Sudan Professionals Association, a leading figure in the December 2019 revolution, joined the anti-coup protesters, as shown in this video shared on social networks.

“They want to drag the country into violence and chaos. But nobody will resort to violence. Our revolution is peaceful and will remain so,” says Mohammed al-Assam in this video.

The political crisis in Sudan comes amid a severe economic crisis. The country is heavily indebted and the daily life of the Sudanese people is riddled with gas, electricity and fuel shortages.