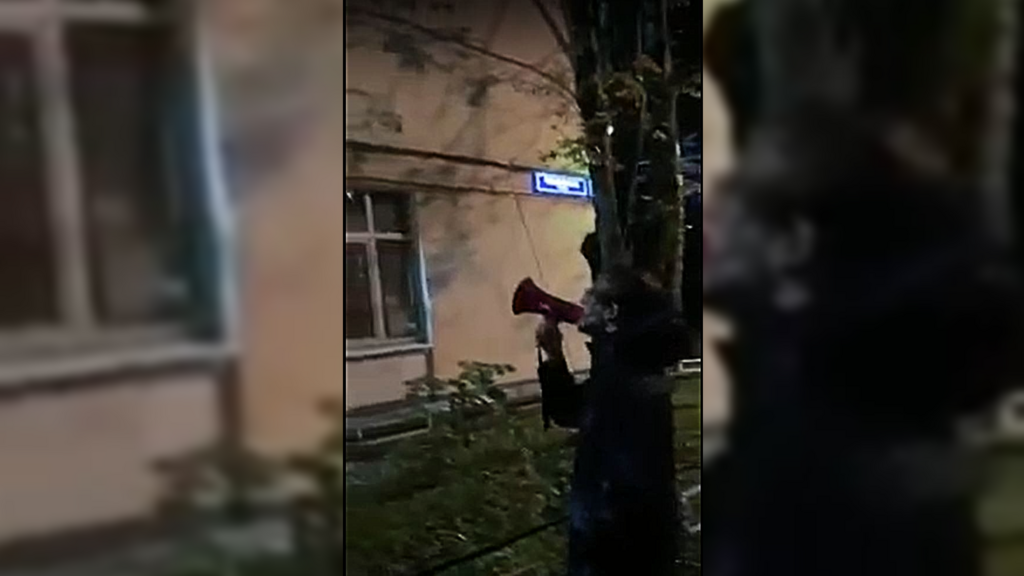 As votes in Russia’s legislative elections were being counted the night of September 20, several representatives of opposition parties were kept from observing the count – as is authorised by electoral law. Three videos show one of these representatives demanding to be let into a Moscow election office, to no avail. President Vladimir Putin’s United Russia party swept the vote, while opposition parties claim mass electoral fraud.

The three videos were published on the Telegram channel of Mikhail Lobanov, an independent candidate who said he would join the Communist Party if elected. He also posted the first two videos on Twitter.


“Committee members, open the door, you are committing a criminal offence. We are the candidates’ representatives,” said Denis Zheleznyakov, Mikhail Lobanov’s representative, over a loudspeaker in the first video.

The second video shows the polling station lit up with people inside, but there is no way for the opposition to enter.

In the third video, police ring the doorbell at the polling station, but there is no response.

In all, four representatives, who had come to observe the vote count in accordance with Russian law, were kept from entering polling station 2645 in the Mozhayskii neighbourhood in the west of Moscow, the night of September 19 and early morning of September 20.

Zheleznyakov, who addressed the members of the electoral commission at the polling station with a loudspeaker, is a 22-year-old student and official representative of Mikhail Lobanov’s team. He told the FRANCE 24 Observers team that several other opposition members were prevented from accessing the vote count:

The situation seemed strange from the start: the vote count was long – usually the commission finishes around midnight, and the commission members refused to let us in.

Zheleznyakov was there with a member of Mikhail Lobanov’s campaign team as well as two members of Yabloko, a social-liberal opposition party. They rang the doorbell around 5am, while the office was still counting votes. Then they knocked on the windows, with no response, as seen in video of the incident.

The Yabloko party members say they called the police, who also tried to ring the bell, again without response, and finally agreed to file a complaint. The four representatives shouted into a megaphone from outside the building, but no one let them in.

I think they tampered with the votes, because they want the ruling party members to win. The actions of the commission members were deliberate and intentional. We knew that by the time they opened the doors [Editor’s note: after the representatives had left], they had already counted all the votes, because they had a special report with them showing the final results. They committed a disastrous violation and these situations are not acceptable during election campaigns.

Russian law permits candidates to appoint representatives to monitor the voting process in order to avoid any falsification of votes or wrongdoing among election commission members. Opposition candidates, who have alleged large-scale fraud in these parliamentary elections, have ramped up their use of representatives to observe and signal suspected fraud.

Since the vote opened on September 17, a number of people have shared images – mostly unverified – showing alleged vote tampering such as ballot box stuffing or people voting through the online system under other people’s names.

Yulia Koshelyaeva, Lobanov’s spokesperson, claimed that “most [election commission members] had a direct order to provide the victory to a certain candidate” because “in Russia, voting takes place in public schools. So naturally, most of the committee members are local teachers or other people paid by the government”.

A Kremlin spokesman said that the elections were held with “competitiveness, openness and honesty”, without directly responding to allegations of fraud. The Russian government itself has accused individuals and NGOs of orchestrating fraud in the run-up to the elections.

The FRANCE 24 Observers tried to contact polling station 2645, but did not receive a response.