Syra, Shehroz Divorce: Who is responsible?

This news has been circulating social media since yesterday and people are going crazy over it. Millions of tweets, Facebook comments, and disrespecting memes have bombarded the several social platforms where Sadaf-Shehroze is being titled as probably the “Most Hated Pakistani Couple” to date and netizens are showering them with comments full of hate and disgust. They are doing every possible thing to tarnish their images and make them feel miserable about their decision to get married. From ridiculing Sadaf Kanwal and making fun of her looks to bashing Shahroz Sabzwari for choosing “trash over treasure”

So, why are these people so angry and taking their personal decision so personally? Hmm, let’s find out.

Syra Yousuf Khan, a name that won millions of hearts with her innocent looks, mesmerizing smile and talent that raised a bar for any artist. She is unarguably one of the most loved artists in Pakistani media. A former model and VJ at MTV Pakistan from where she got acknowledged for her talent and approached for TV serials and movies at a very young age. Where on the other hand, Shehroz Sabzwari was already being recognized for his emerging talent and chocolate-boy looks. He is a son of a maestro-of-his-time, Behroze Sabzwari, and undoubtedly was following his dad’s footsteps.

Their destinies collided at a wedding ceremony of a mutual friend where Syra was only 18 and Shehroz was 19 years old. The cupid stroked at them and they both became good friends. The couple was allegedly dating when they shared the screen for the sequel of a classic drama serial Tanhaiyyan and became the hot-favorite couple. After a long relation of six years, they finally tied the knot in an intimate ceremony on 29th February 2012. The pictures of their wedding spread on social and digital media like a wildfire. Netizens were going gaga to see their favorite on-screen couple tying the knot in real. They were looking extremely beautiful donning simple dresses on their Nikkah day. The cute smile on their faces and the bond of Syra with Shehroz’s family was awe-inspiring. To be honest, it’s rare to see such simple yet beautiful couples nowadays. They took all the media attention and the pictures of them getting “Nikkahfied” kept surrounding social media for a big time.

Even after a long, the charm of “Sairoz” hasn’t faded away for the fans. They cherished and appreciated all the glimpses from the events they have ever attended and 14th July 2014, the netizens again celebrated a big-time when the news of the arrival of Baby Nooreh Shehroz, circulated the social media. They appeared to be the most adorable parents ever who themselves looks like two young teenagers. To cut the long story, Syra and Shehroz were the title holders for the “Most Inspiring Couple” for the fans.

Another breaking news made the round at Social media but this time it was hell shocking and devastating. Of course, the news of their favorite duo breaking up after living good 7 years together disturbed everyone to the core. Before their official statements, these rumors were already floating about Syra and Shehroz getting divorced, which they both denied saying they have just been separated for about 6 months. However, soon the Syra made it to the Social media with this news: 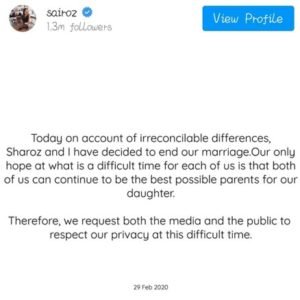 Shehroz tweeted the same on his handle. He also added that he hopes “she will continue to enjoy and reciprocate the love and respect to which she, and both her parents are entitled to” and both respect media to respect their privacy.

BEGINNING OF THE CONTROVERSIES:

After the news being pulled out in public, the netizens put on their spying glasses and started connecting the dots regarding the reason of them splitting up, and soon tied the chains of doubt around Sadaf Kanwal’s neck, an artist and a big name of Pakistani Media Industry. The beautiful diva has been blamed as a “homewrecker” and been slut-shamed for allegedly been dating and cheating on Syra with Jr. Sabzwari.

The story of these two partnered for a performance at IPPA awards 2019 in Oslo, Norway became the reason for them coming under the dark clouds. Media took it to another level to bash Sadaf Kanwal that Shehroz had to jump in between. He made a video statement saying that “Who said this that Sadaf Kanwal was the reason behind our separation. Was it me, was it Syra and was it any of our friends, family or cousins? No, still you all decided to drag someone’s sister or daughter into the matter and became the judge, jury by yourself”

Before that, Sadal Kanwal was said to be a good friend of both Syra and Shehroz. Even at one place, she stated both of them as her “fav couple” 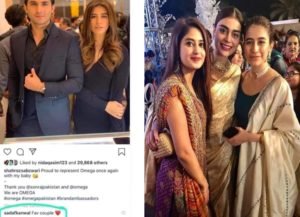 So coming back to the present. Syra and Shahroz are no more together and Shahroz recently married to Sadaf Kanwal. Now the question is “Is the public reaction fair & genuine?”

Ok, we are all praise for Syra, for elegantly parting ways with Shehroz and not making any negative comments about him. That’s great and one should show this type of dignity for their Ex. But hasn’t Shahroze showed the same kind of grace and maturity? He, in his comments and also in his video statement, hasn’t said a single bad word about Syra. He just stated the fact that people got separated when things don’t work out between them and Syra is as respectful as she was for him as her partner and a mother of his child. Let’s be honest, it’s just our ASSUMPTIONS that Sadaf became the reason for them parting ways. And if you still want to be judge, jury, and executioner all by yourself then 1st ask these questions to yourself.

No, marrying Shahroz cannot count as a reason.

Where on one hand, I think that bashing Sadaf Kanwal and Shahroz for allegedly cheating on Syra without any solid proof is wrong, on the other hand, there are some other brows-raising questions that are disturbing me. 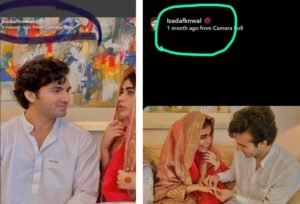 What so ever the truth behind their separation maybe, but the fact is that it’s their life. We already have bashed him on the basis of our judgments, insulted them, and tarnished their images as punishment for sharing their personal life with us which was something way more wrong than what we think they did to each other. These types of BREAKING NEWS keeps circulating the internet very often, but we should not BREAK someone’s hard-earned respect and efforts of one maintaining their career, because, in the end, they are just humans like you and me. So kindly take off your Judge robes, live and let others live.