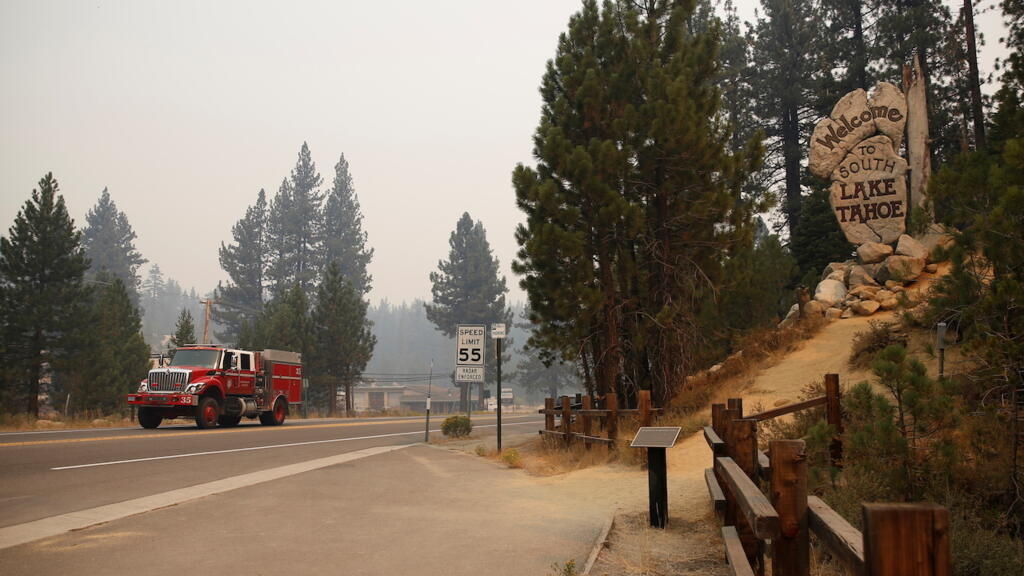 Firefighters battled in heavy winds on Tuesday to protect homes on the fringe of tinder-dry forests near Lake Tahoe from a wildfire that has chased thousands of residents and tourists from the popular resort destination in California’s Sierra Nevada range.

The Caldor fire, burning since mid-August in the mountains east of the state capital, Sacramento, crested a ridgeline and roared downslope on Monday toward the southern end of the Tahoe basin that straddles the California-Nevada border, triggering mass evacuations.

An estimated 50,000 people are under evacuation orders due to the Caldor blaze, according to the California Department of Forestry and Fire Protection (Cal Fire).

Jeff Hodge, a semi-retired banker who works part-time during the ski season as a chair-lift operator, recalled the dread and uncertainty he felt in the hours leading up to his evacuation Monday. Police going door-to-door showed up at his South Lake Tahoe apartment.

“For an older person, it was really unsettling,” the 65-year-old said Tuesday at a Red Cross shelter in the town of Truckee, northwest of Tahoe.

Hodge told Reuters he packed a pair of guitars and amplifiers, ski equipment, golf clubs, a hamper full of clothes and a bottle of bourbon into his 1995 sedan, waited for traffic to abate and drove out in the afternoon as ash and soot rained down.

By Tuesday, the fire had charred more than 191,000 acres (77,300 hectares) of drought-parched forests, some 14,000 acres (5,665 hectares) more than the day before. Firefighters had managed to carve containment lines around just 16% of its perimeter.

Winds gusting with cyclone force to 45 miles per hour carried embers up to a mile beyond the leading edge of the blaze, igniting spot fires as hillsides of trees exploded in towering flames.

At least 669 structures were listed as destroyed on Tuesday, most of them single-family homes, with 34,000 more buildings considered threatened, Cal Fire’s Herrera said.

No deaths have been reported. Three firefighters and two civilians were injured in recent days.

Smoke and soot from the fire has choked the usually pristine skies around Lake Tahoe for days, leading to an early exit by many tourists from a region renowned for its swimming, boating, hiking and camping. The area also is home to world-class ski resorts.

As of Tuesday, nearly 4,000 personnel and a squadron of over two dozen water-dropping helicopters were assigned to the blaze, whose cause remained under investigation.

Only the Dixie fire, which has charred 771,000 acres (312,000 hectares) farther north in the Sierra, has engulfed more territory this year than Caldor.

Both fires are among nearly two dozen raging across California and scores of others elsewhere in the West, during a summer fire season shaping up as one of the most destructive on record. The blazes have been stoked by extremely hot, dry conditions that experts say are symptomatic of climate change.

The Forest Service has closed all 18 national forests in California to the public through mid-September, an extraordinary measure the agency has taken only once before – during last year’s catastrophic fire season. The shutdown officially begins at midnight on Tuesday.

A National Weather Service red-flag warning for dangerously gusty winds and extremely low humidity was posted for the Tahoe area through Wednesday night.