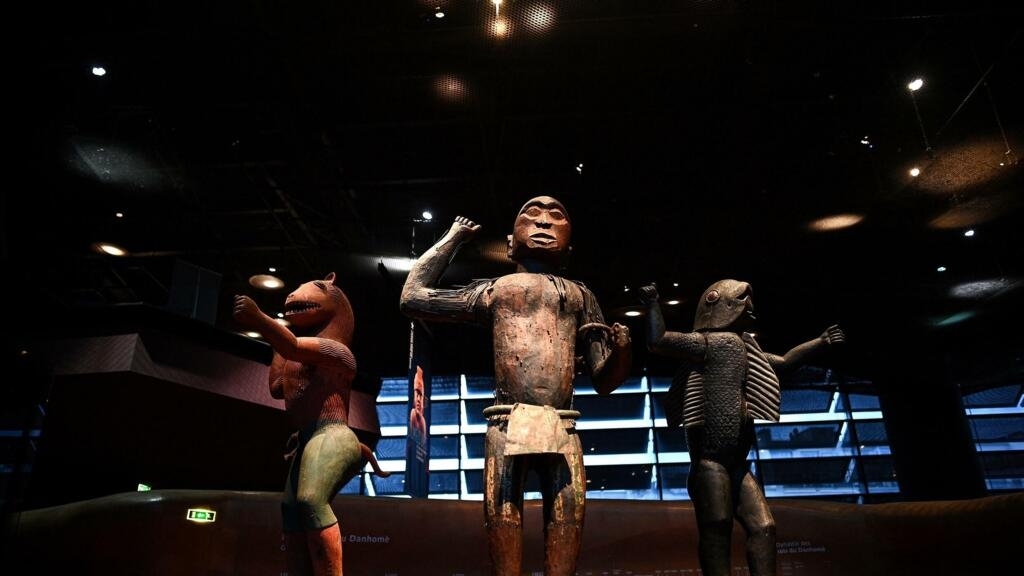 A Paris museum on Tuesday exhibited over a dozen colonial-era treasures taken from Benin, the last time they will be shown in France before being handed back in a landmark gesture.

The 26 pieces, from a trove of objects snatched by French forces in 1892, are being shown for just six days at the Quai Branly museum before being shipped to the West African country later this month.

The decision to return them follows growing calls in Africa for European countries to return the colonial spoils from museums.

The move is part of a drive by French President Emmanuel Macron to improve his country’s image in Africa, especially among young people.

The treasures are from the kingdom of Dahomey in the south of present-day Benin and include the throne of Dahomey’s last king, Behanzin, as well as three totemic statues, four palace doors, several portable altars and three warrior dance staffs.

The Elysee said Macron’s commitment for Africans to be able see their cultural wealth at home and not just in European museums “marks an important step in building a new relationship between France and Africa”.

Earlier this month, Macron announced that a “talking drum” cherished by Ivory Coast’s Ebrie people, also at the Quai Branly, would be handed back as well.

Some museum directors have criticised the move to return works they deem of “universal” interest.

But Quai Branly president Emmanuel Kasarherou said he welcomed the “soul-searching” that those calls had triggered about the provenance of artworks.

‘Ripped from their cultures’

The Quai Branly, which has a vast trove of African artefacts, has begun a sweeping review of its collection of 300,000 objects.

The aim is “to identify works believed to have been taken through violence, without the owners’ consent, or as war booty or through the coercion of the colonial administration,” he told AFP.

“Not all objects that are in European collections have been stolen,” he emphasised, but “what proportion were? Our objective is to find out.”

Since his election in 2017, Macron has gone further than his predecessors in admitting to past French abuses in Africa.

In a speech to students in Burkina Faso soon after taking office, he vowed to facilitate the return of African cultural heritage within five years.

An expert report commissioned by Macron counted some 90,000 African works in French museums, 70,000 of them at the Quai Branly alone.

The restitution calls culminated last year in a vote in the French parliament, where lawmakers overwhelmingly backed returning a group of artefacts to Benin and Senegal, another former French colony.

Macron has predicted that the 26 objects taken from the Abomey palace will be “the pride of Benin” when they are handed back at the end of October.

They will be exhibited at various sites in Benin, including a former Portuguese fort in the city of Ouidah, once a slave-trading hub, while awaiting the completion of a museum in Abomey to house them.

Benin’s President Patrice Talon has previously said he was “not satisfied” with the “small steps” taken by France and called on Macron to go further.

Experts estimate that 85 to 90 percent of African cultural artefacts were taken from the continent. But establishing how an object came into European hands can be very tricky.

Some were seized by colonial administrators, troops or doctors and passed down to descendants who in turn donated them to museums in Europe.

But others were presented as gifts to missionaries or acquired by African art collectors at the start of the 20th century or discovered during scientific expeditions.

France is not the only former colonial power to have been targeted by restitution requests.

Britain, Belgium, the Netherlands and Germany have also taken a hard look at how they amassed their art collections.

Nigeria said last month it had agreed with Germany on the return of hundreds of so-called Benin Bronzes — metal plaques and sculptures from the 16th to 18th centuries that were stolen from the palace of the ancient Benin Kingdom in present-day Nigeria.

Belgium for its part has announced plans to return several objects looted from what is now the Democratic Republic of Congo.