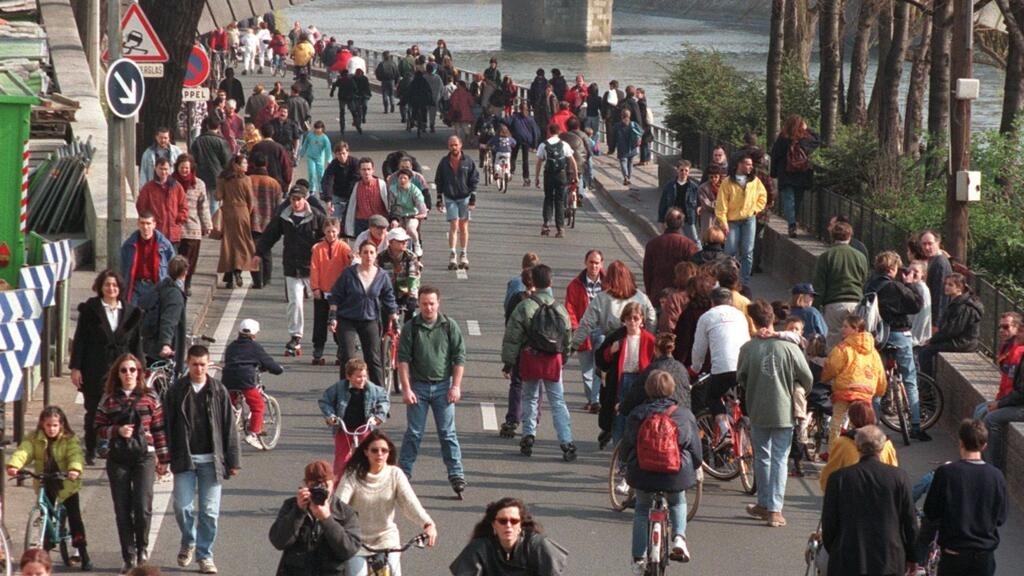 Paris may be on track to fulfil its goal of becoming one of Europe’s cycling capitals, but the city has been handed a less than flattering grade when it comes to accommodating pedestrians. A new survey has deemed its “walkability” mediocre – in part because of a swelling population of reckless cyclists and e-scooter riders.

If you think a stroll along the car-free banks of the Seine is the perfect way to spend a tranquil afternoon in Paris, think again.

With the city’s 15,000 free-floating e-scooters on the prowl, and cyclists nearing the one-million mark, a Paris stroll has now become a hazardous balancing act for pedestrians trying to dodge screeching wheels and aggressive bicycle bells.

“Indeed, the city of Paris is not very pleasant for pedestrians,” says Anne Faure, head of the advocacy group Rue de l’Avenir. This week, her association published the results of France’s first ever “city walkability” survey, in partnership with advocacy group 60 Millions de Piétons and the French federation of pedestrian excursion (FFRandonnée).

Rated on a scale from 1 to 20, the City of Light scored a meagre 8.07, or a “D” on a lettered grade scale, meaning mediocre. Paris was graded 8.52 for pedestrian safety, 8.14 for walkability comfort, and a mere 7.00 for its efforts to improve the wellbeing of pedestrians.

Paris: pedal- but not pedestrian-friendly

“For a few years now, the city of Paris has done a lot of work to accommodate bicycles, which is of course a good thing because it was very much behind other European cities when it comes to that. But it has created conflicts over the use of car-free zones, especially for pedestrians,” Faure told FRANCE 24.

“Pedestrians aren’t very happy because they feel that bicycles are taking up a lot of public space,” she added, pointing to City Hall’s enormous push to make Paris more pedal-friendly, adding thousands of new bike-lanes and expanding the availability of rent-as-you-go bicycles in recent years.

The Covid-19 pandemic also prompted the city to create high-speed – and not always pedestrian-safe – “Covid lanes”, encouraging people to jump on a bicycle rather than public transport when crossing the city.

“This summer a new bike lane suddenly appeared in the middle of the pavement. Where’s the space for pedestrians, prams and wheelchairs to pass?” local resident Olivier Ansart de Lessan posted on Twitter, along with a photo of a freshly painted bicycle lane largely infringing on a sidewalk.

Meanwhile, 57-year-old Odile Jersyk has decided to do something about reckless cyclists, launching a course to teach adults how to pedal both safely while remaining well-mannered. “Bicycles mustn’t become tools to terrorise pedestrians,” she said in a filmed interview with French daily Le Parisien.

The surge in reckless e-scooter use is another major concern, says Faure of Rue de l’Avenir. In theory, e-scooters are bound to a 20km/hour speed limit in Paris, and 10km/hour in some areas like the Champs-Élysées. But in practice, they often poses a lethal danger to pedestrians.

“The e-scooters need to be either banned, or be policed more,” said Faure. “There have already been a dozen deaths in the past two years,” she said. In June, a 31-year-old Italian national died after being run-over by an e-scooter carrying two women along the Seine river banks.

On Sunday, Parisian journalist Brice Couturier tweeted his frustration at both bicycles and e-scooters, saying they had become “a sore” for pedestrians. “Cars have learned to stop at a red-light,” he wrote. “But with e-scooters on the pavements and bikes disrespecting all types of traffic rules, life for Parisian pedestrians has become hell.”


Faure said Paris officials’ recent move to reduce the speed-limit for cars to 30km/hour, down from 50km/hour, is likely to boost the city’s “walkability” score in the next survey. However, she added, more must be done to accommodate those on foot, including by adding “more benches for older pedestrians, as well as toilets and water fountains”.

Some 68,510 people took part in the online survey, which investigated the walkability of 200 French cities. Its results will be presented to city officials in Marseille – France’s second-largest city, which got a rock-bottom score of 5.19 (“G”) – on September 17.