Olaf Scholz, the Social Democrat who has cast himself as... 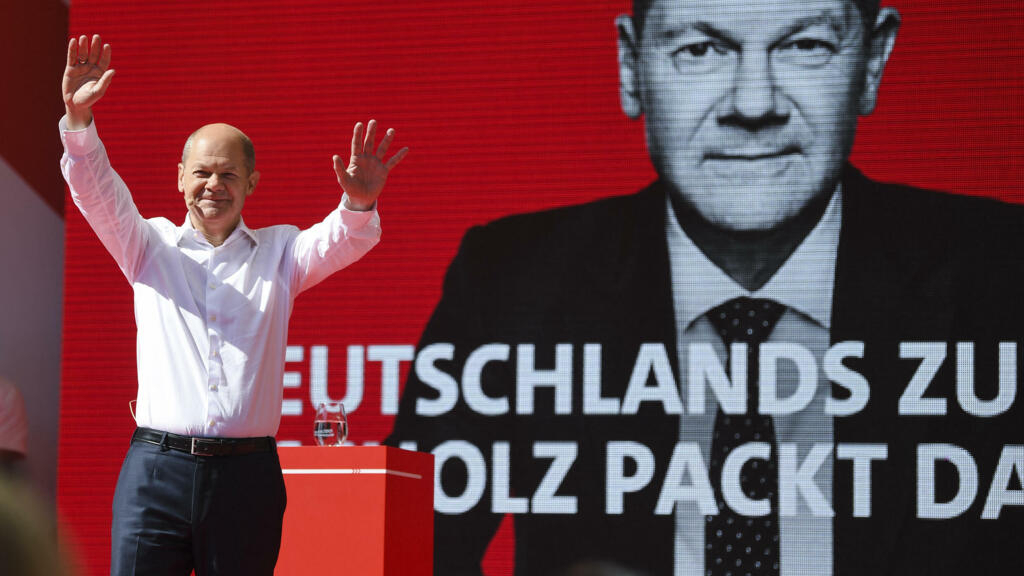 Centre-left Olaf Scholz has cast himself as the favourite to succeed Chancellor Angela Merkel in the September 26 general election – with his Social Democratic Party (SPD) boasting a consistent poll lead throughout the campaign. FRANCE 24 looks at how Germany’s current finance minister has turned his lack of charisma into a political strength.

The SPD’s poll lead has surprised many observers of German politics, seeing as the party had lagged behind Merkel’s Christian Democratic Union (CDU) and the Greens in the polls as late as June.

But Olaf Scholz – Germany’s finance minister, vice-chancellor to Merkel and a longstanding bête noir of his party’s largely leftist members – oversaw an extraordinary turnaround for the SPD. After years of sinking popularity since they were last in power under Gerhard Schroder, chancellor from 1998 to 2005, the SPD finally look set to have a shot at leading a German government again.

The blunders of Scholz’s opponents played a key role in making him the favourite. Pollsters say the CDU made a big mistake in making the hapless Armin Laschet their candidate instead of his popular right-wing rival Markus Soder, the leader of the CSU (the CDU’s Bavarian sister party), who won acclaim for his handling of Covid-19 as Bavaria’s minister-president. Laschet notably embarrassed himself and his party when he was photographed laughing during a visit to a flood-stricken town in July.

Green candidate Anna Baerbock, meanwhile, saw her poll ratings plummet amid accusations of plagiarism in her latest book and exaggerated claims in her CV.

On the face of it, then, Scholz looks like the favourite by default. After all, he is an (in)famously uncharismatic politician, whom Germans have long nicknamed “Scholzomat” – combining his name with “automat” – because some say he responds to questions like a robot.

“He is the archetypal politician who thinks well but communicates poorly,” as weekly magazine Der Spiegel put it.

The SPD also seems to have plumped for Scholz reluctantly. He threw his hat into the ring in the party’s leadership contest in 2019 – but party members preferred two left-wing politicians, as Scholz came under fire once more from an SPD base that has always regarded him as too centrist.

But Merkel, too, is an uncharismatic politician who was an outsider within her own party before becoming chancellor. Indeed, Scholz has frequently been likened to the outgoing German leader – including by social media users who have nicknamed him “the Merkel” (using the German masculine version of “the”) and “Vati”, meaning “Dad”, in reference to Merkel’s longstanding nickname “Mutti”, meaning “Mum”.

As the other candidates faltered, the 63-year-old started to look like a reliable heir to a leader who – in the eyes of many German voters – was the embodiment of stability and pragmatism for 16 years.

Scholz also made deft use of his position as Merkel’s finance minister and deputy – taking a “whatever it takes” approach to steering the German economy through the coronavirus crisis before promising to spend lavishly to help rebuild towns in western Germany devastated by floods in July.

A history of comebacks

The SPD candidate has a long history of coming out on top against the odds. His first significant role was as interior minister of his native Hamburg, a city-state in Germany’s federal system. The SPD was kicked out just months after Scholz took office. But “Scholzomat” bounced back a year later, becoming secretary-general of the SPD.

It was in this role that Scholz provoked SPD ire by backing Schroder’s Agenda 2010 economic reform programme – which cut both taxes and the German welfare system. Many international observers and voices on the German right credit this policy package with restoring the country’s economic dynamism and setting it up for years of solid export-led growth – but Agenda 2010 was anathema to SPD leftists who regarded it as a betrayal of their party’s principles.

Under pressure from the left, Schroder resigned as SPD leader in 2004, a year before he lost a general election to Merkel. Scholz was the “primary victim of Schroder’s reforms”, Der Spiegel wrote in 2007. However, this year Scholz staged yet another comeback, becoming Merkel’s labour minister in her first CDU-SPD grand coalition. He tried to burnish his left-wing credentials by criticising the chancellor’s economic policies as insufficiently social democratic

Scholz was elected mayor of Hamburg in 2011 and remained in this role until Merkel drafted him back into her government as vice-chancellor and finance minister in 2018. He replaced the legendary guardian of the German treasury Wolfgang Schauble, a conservative whom Europeans had come to either love or loathe for his strict enforcement of budgetary orthodoxy in the eurozone. Scholz stole Schauble’s clothes and flaunted them – earning him the nickname “Wolfgang Scholz”.

Unsurprisingly, this went down very badly with SPD members – who handed him a resounding defeat in the 2019 party leadership contest. But before the party made him its chancellor candidate a year and a half later, Scholz modified his public image – using the Covid-19 crisis to show his stripes as an economic interventionist while softening his communication style.

Scholz also boosted his standing with the left by allowing certain statements from decades ago to come to the fore – such as his criticism at the time of Willi Piecyk, the leader of the Young Socialists from 1980 to 1982, as “not anti-capitalist enough”.

But if the polls are correct and the SPD ends up the largest party on September 26, Scholz may have to engage in some tricky diplomacy with the leftist party faithful once more. “Scholzomat” has come under fire from conservatives for refusing to rule out a coalition with far-left party Die Linke – which is rooted in the Communist Party that ruled over East Germany. At the same time, Scholz has made it clear that he would much prefer to govern alongside the Greens while excluding Die Linke – risking the ire of SPD leftists.

This article was translated from the original in French.