Macron visits the former IS group’s stronghold in Iraq city... 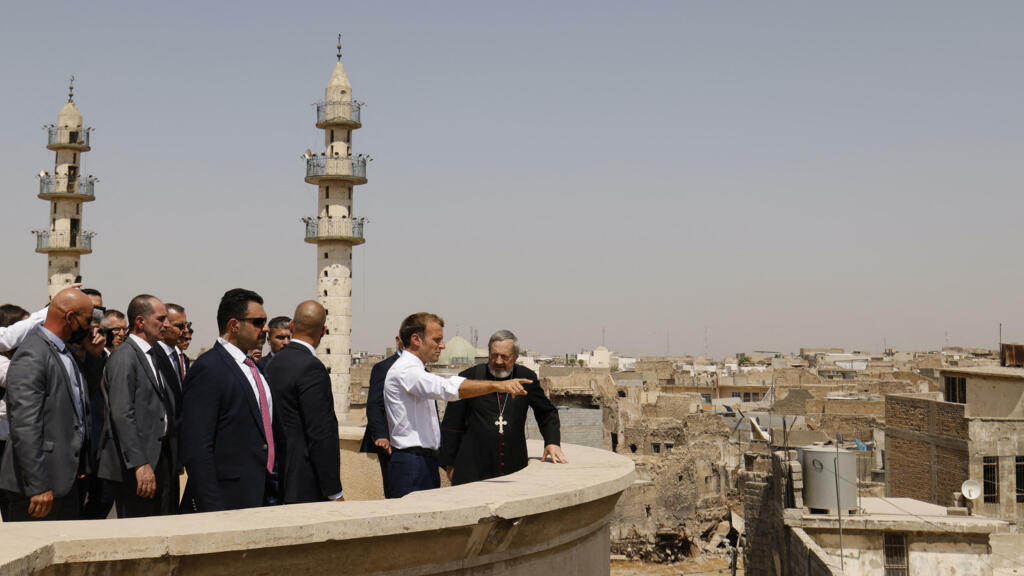 French President Emmanuel Macron paid a visit on Sunday to the Islamic State group’s former Iraqi stronghold Mosul, a day after vowing to keep troops in the country.

Macron made the commitment to visit Mosul during a regional summit in Baghdad largely devoted to the fight against terrorism and the impact of the Taliban’s takeover of Afghanistan as the US withdraws.

“No matter what choices the Americans make, we will maintain our presence in Iraq to fight against terrorism,” he told a news conference on Saturday.

On Sunday, the French leader set foot in Mosul, a Sunni Muslim city recaptured from the Islamic State group (IS) in 2017 after three years.

His visit to Mosul, a melting pot of Iraq’s diverse ethnic and religious communities, is seen as an opportunity to renew his support for Christians in the Middle East.

Macron visited the Church of Our Lady of the Hour, a church that the UN’s cultural agency UNESCO is working to restore.

France, which finances French-speaking Christian schools in the region, aims to boost the plight of Christians in the Middle East, as well as other minorities.

“This message is civilisational but also geopolitical. There will be no balance in Iraq if there is no respect for these communities,” said the French president.

Macron was also due to make a stop at the site of Mosul’s Al-Nuri mosque, where IS leader Abu Bakr al-Baghdadi had declared the establishment of a “caliphate” in 2014.

IS blew up the famed 12th-century mosque in June 2017 as Iraqi forces closed in on the jihadists in Mosul’s Old City.

UNESCO is now organising a vast project to rebuild it almost identically, with its famed leaning minaret.

The mosque and church are part of three reconstruction projects led by UNESCO and funded by the United Arab Emirates to the tune of $50 million.

The initiative, called “Reviving the Spirit of Mosul”, the largest in the organisation’s history, includes plans to rebuild Ottoman-style heritage houses as part of a European-funded project.

It was the first such visit for a French president, he said.

Macron will also meet with young Iraqis, including entrepreneurs and students, at the University of Mosul.

On Sunday he will also visit Arbil, capital of the autonomous region of Iraqi Kurdistan.

After a visit to French special forces at Camp Grenier, he will hold talks with Kurdish President Netchirvan Barzani, as well as his predecessor, Massud Barzani.

“I look forward to discuss bilateral ties, Iraqi elections and other pressing issues with President Macron. I remain grateful for France’s continued support to the Kurdistan Region and Iraq,” the Iraqi Kurdish president tweeted.

Macron will also meet the family of a Peshmerga fighter killed by the IS group, to pay tribute to the Kurdish contribution to the fight against the jihadists.