Homes bulldozed to make way for gold mining in DR... 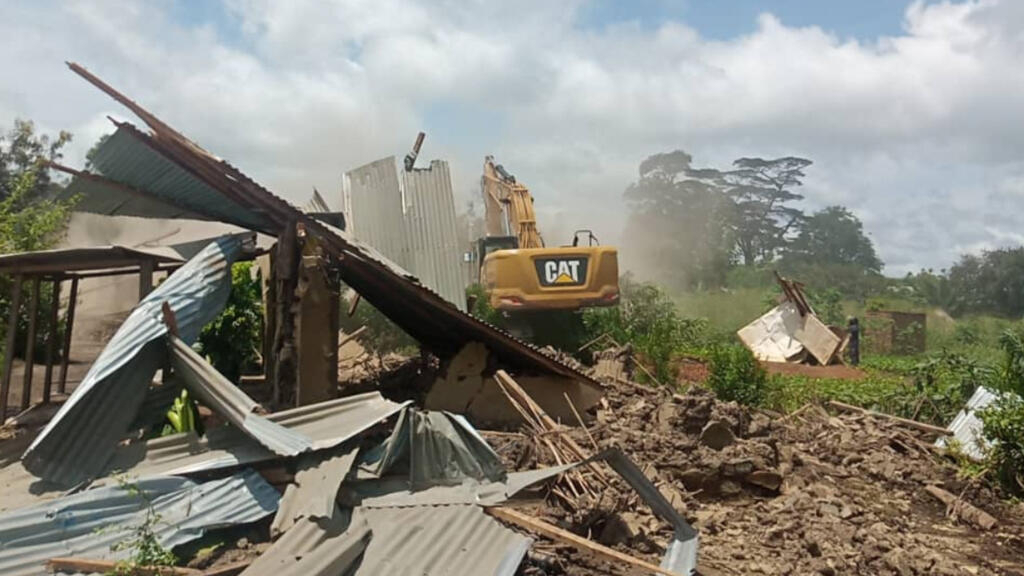 In mid-October, local authorities ordered the destruction of several houses in the Democratic Republic of the Congo on land operated by the mining company Kibali Gold Mining since 2009. Local residents protested against the operation in demonstrations that were brutally repressed by security forces, killing several people.

The days-long protest came to a head on October 22 in the province of Haut-Uele, located in the northeastern part of the Democratic Republic of the Congo.

Up to seven people, including a police officer, were killed in clashes between security forces and the demonstrators from the mining community of Durba, according to local media.

Locals had gathered to protest against the local government’s demolition of a number of homes in the villages of Bandayi and Mégé on October 19. These homes were built within “Exclusion Zone B”, part of a mining concession owned by Kibali Gold Mining. While the zone had been established as an area exclusively for mining, the company has not yet started exploitation there.

Videos, which were shared on WhatsApp by activists and later transferred to the FRANCE 24 Observers team, show a bulldozer destroying a home. Other images show locals leaving, some carrying sheets of corrugated metal, others balancing chairs on their head – whatever belongings they could save before the bulldozer arrived.

‘People didn’t even have the time to gather their belongings’

The FRANCE 24 Observers team spoke to Bissia Tchang, the spokesperson for a local organisation called the League for Youth United for the Development of Watsa Territory. He says that locals weren’t given any warning.

Kibali Gold Mining has been wanting for some time to start operations on Exclusion Zone B. On several occasions, authorities stated that people living in Mege would not be relocated – just those living in the community of Bandayi. The people in Bandayi were given two months warning and were even given new land as part of the relocation process.

But to our surprise, bulldozers arrived in Mege early Tuesday morning [October 19]. They started destroying homes belonging to people without giving them any kind of warning or information.

People didn’t even have the time to gather their belongings. A child was killed because he was asleep in one of the homes that was bulldozed. We can’t stand for that. That’s why we protested. How could the authorities do that to a population that they are supposed to protect?

Kibali Gold Mining, of which the Canadian firm Barrick is a 45% shareholder, has been active in the region since 2009. It owns and operates a gold deposit there with a surface area of more than 1,800 km2, one of the largest gold deposits in the world according to Mining-Technology, a British publication that specialises in the industry.

In the first trimester of 2021, Kibali Gold Mining produced close to 192,000 ounces of gold, according to Financial Afrik. But the company, which is currently only exploiting part of its deposit, wants to extend its activities and increase production.

More than 1,500 households were affected by the demolitions in the town of Bandayi and 860 homes were destroyed in Mege, according to Heritier Mungumiyo, who runs local media outlet Oriental Info.

Thousands of people are now exposed to the elements. They don’t know where to go. The situation is miserable. Some victims are staying in churches, others in schools. Some people have found shelter with friends or family members. But others are staying near their destroyed homes and living under tarps. The provincial authorities are refusing to say anything. They are treating people here in an inhuman manner.

The mining code stipulates that people should be consulted beforehand and that they have to agree to be relocated or paid compensation if the company estimates that its activities might have a harmful effect on the lives of the local population.

These consultations should take place during studies on environmental impact, well before the company begins its activities. The communities need to understand why they are being moved and agree. The company that wants to exploit these resources needs to finance everything.

But in reality, the companies don’t respect these procedures because they don’t want to spend the money. There’s always an issue – either the new land allocated to the population isn’t as good as what they had before or the government hasn’t planned enough room for fields or there isn’t a good water source in the new village. In most of these cases, the government has undervalued the community’s properties.

So, sometimes locals refuse the compensation and the companies come and try to remove them by force. Not wanting to sleep outside, they accept the small compensation that they are offered.

Cyrille Mutombo, the national director of Barrick Gold, told the FRANCE 24 Observers team that people living in this area were paid compensation and relocated in 2013. The homes that are currently being bulldozed belong to people who moved onto the land owned by the mining company and built homes there illegally starting in 2015.

Kibali’s Zone B was named as an exclusive zone in May 2010 and Kibali Gold Mining company paid damages to the people who were living there. The amount each person received was determined according to a sliding scale. They got 50% more than the value of their goods.

Then, under the supervision of government officials, we used posts to demarcate the zone that would be used exclusively for mining. Unfortunately, starting in 2015, new people moved in, destroying some of these posts and building homes there. These are the people demanding compensation. But they are illegal occupants.

According to our schedule, we should begin exploiting this site in 2022. The deadline for local people to leave the site has now expired – we even extended it several times. Now, the provincial government doesn’t have a choice. They have to start demolishing homes.

Our team contacted Ismaël Ebunzé, the minister of mines in the province of Haut-Uélé, but he didn’t respond to our request for an interview.

In a press conference held on October 22, Christophe Baseane Nangaa, the governor of the province, ordered a halt to the demolitions, while waiting to determine “if those who carried out this operation exceeded their mandate”.