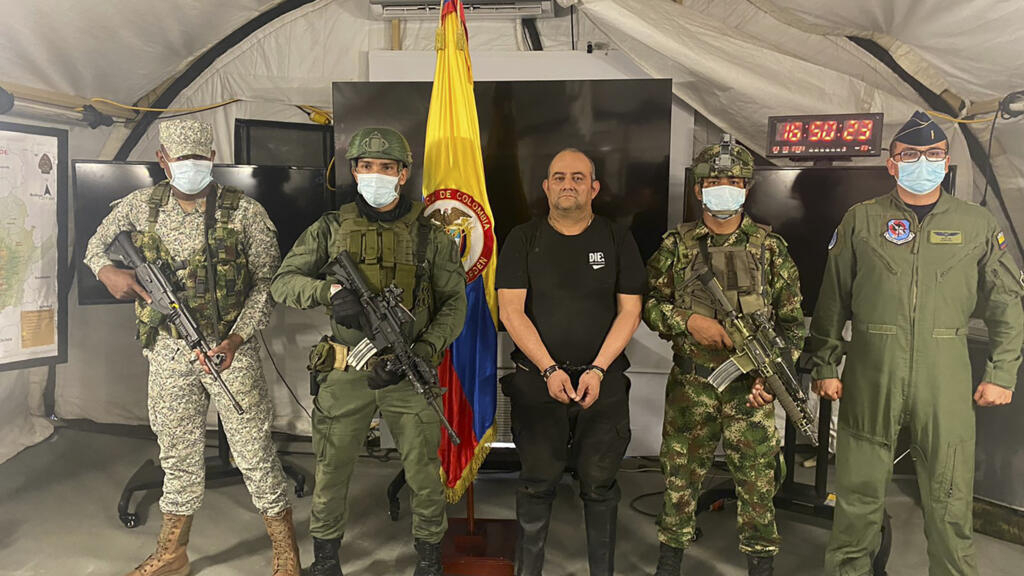 Colombian security forces have captured the country’s most wanted drug trafficker, a rural warlord who stayed on the run for more than a decade by corrupting state officials and aligning himself with combatants on the left and right.

President Iván Duque likened the arrest Saturday of Dairo Antonio Úsuga to the capture three decades ago of Pablo Escobar.

Úsuga, better known by his alias Otoniel, is the alleged head of the much-feared Gulf Clan, whose army of assassins has terrorized much of northern Colombia to gain control of major cocaine smuggling routes through thick jungles north to Central America and onto the US.

He has long been a fixture on the US Drug Enforcement Administration’s most-wanted fugitives list, for whose capture it had been offering a $5 million reward.

He was first indicted in 2009, in Manhattan federal court, on narcotics charges and for allegedly providing assistance to a far-right paramilitary group designated a terrorist organization by the U.S. government.

Later indictments in Brooklyn and Miami federal courts accused him of importing into the US at least 73 metric tons of cocaine between 2003 and 2014 through countries including Venezuela, Guatemala, Mexico, Panama, and Honduras.

But like many of his gunmen, he’s also cycled through the ranks of several guerrilla groups, most recently claiming to lead the Gaitanist Self Defense Forces of Colombia, after a mid-20th century Colombian leftist firebrand.

Authorities said intelligence provided by the US and UK led more than 500 soldiers and members of Colombia’s special forces to Úsuga’s jungle hideout, which was protected by an eight rings of security.

Úsuga for years flew under the radar of authorities by eschewing the high profile of Colombia’s better known narcos.

He and his brother, who was killed in a raid in 2012, got their start as gunmen for the now-defunct leftist guerrilla group known as the Popular Liberation Army and then later switched sides and joined the rebels’ battlefield enemies, a right-wing paramilitary group.

He refused to disarm when that militia signed a peace treaty with the government in 2006, instead delving deeper into Colombia’s criminal underworld and setting up operations in the strategic Gulf of Uraba region in northern Colombia, a major drug corridor surrounded by the Pacific Ocean and Caribbean sea on either side.

Leaks and a network of rural safe houses he supposedly moved among every night allowed him for years to resist a scorched-earth campaign by the military against the Gulf Clan. As he defied authorities, his legend as a bandit grew alongside the horror stories told by Colombian authorities of the many underage women he and his cohorts allegedly abused sexually.

But the war was taking its toll on the 50-year-old fugitive, who even while on the run insisted on sleeping on orthopedic mattresses to ease a back injury. In 2017, he showed his face for the first time on occasion of Pope Francis’ visit to the country, publishing a video in which he asked for his group be allowed to lay down its weapons and demobilize as part of the country’s peace process with the much-larger Revolutionary Armed Forces of Colombia.

His arrest is something of a boost for the conservative Duque, whose law and order rhetoric has been no match for soaring production of cocaine.

Land dedicated to the production of coca — the raw ingredient of cocaine — jumped 16% last year to a record 245,000 hectares, a level unseen in two decades of US eradication efforts, according to a White House report.