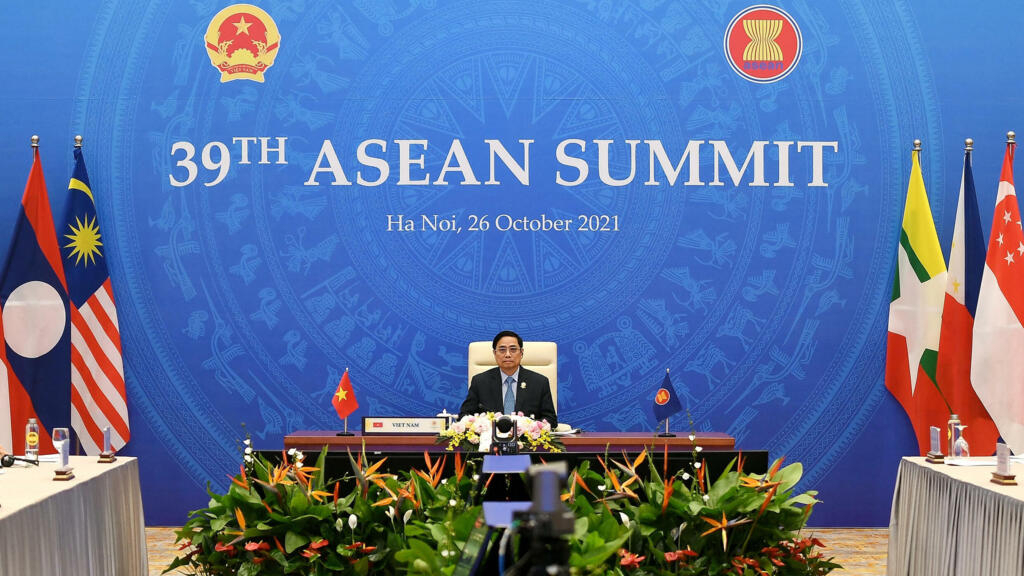 Southeast Asian leaders kicked off an ASEAN summit Tuesday but Myanmar refused to send a representative after being angered by the bloc’s decision to exclude the country’s junta chief.

The virtual gathering marked the start of three days of meetings hosted by the Association of Southeast Asian Nations, with US President Joe Biden as well as Chinese and Russian leaders set to attend.

Myanmar topped the agenda of Tuesday’s talks between regional leaders, with the country still in chaos following February’s military takeover and the subsequent deadly crackdown on dissent.

Facing calls to defuse the crisis, ASEAN, which includes Myanmar, has drawn up a roadmap aimed at restoring peace but there have been doubts over the junta’s commitment to the plan.

The coup snuffed out Myanmar’s short-lived experiment with democracy, with Nobel laureate Suu Kyi now facing a raft of charges in a junta court that could see her jailed for decades.

Min Aung Hlaing’s exclusion was an unprecedented snub from an organisation often criticised for being toothless, and was slammed by the junta as a breach of the bloc’s policy of non-interference in member states’ affairs.

The 10-member group had invited Chan Aye, director-general of the junta-appointed foreign affairs ministry, in the chief’s place.

But a junta spokesman said Monday that sending a more junior figure could “affect our country’s sovereignty and image”, and no Myanmar representative was present at the opening of the virtual summit.

Aaron Connelly, a Southeast Asia expert from the International Institute for Strategic Studies, said the decision to bar the junta chief was “tremendously significant”.

“It is the most significant sanction that ASEAN has ever handed to a member state, and it is in direct response to the non-compliance that we have seen from the (junta),” he told a panel discussion Monday.

But observers think it unlikely the bloc will go further, such as by suspending Myanmar, and see little chance of decisions at this week’s meetings that could prompt a change of course from the junta.

“ASEAN is divided over the issue of Myanmar… There will unlikely be any real progress,” a Southeast Asian diplomat, speaking anonymously, told AFP.

While member states including Malaysia, Singapore and Indonesia have pushed for the bloc to take action, others with more authoritarian governments have been less vocal.

Other issues likely to be discussed include the South China Sea — where Beijing and several Southeast Asian countries have overlapping claims — and the coronavirus pandemic, as much of the region emerges from an outbreak.

This year’s meetings are hosted by Brunei and are taking place online due to virus-related travel difficulties.

After the Southeast Asian leaders hold talks Tuesday, Biden will take part in a US-ASEAN summit later in the day, and in a summit including Chinese Premier Li Keqiang and other world leaders Wednesday.

It is the first time in four years that a US president has attended the ASEAN summits, as Biden seeks to rally support in the region against a rising China.