After coup, Guineans celebrate ‘freedom’ with a mix of ‘hope... 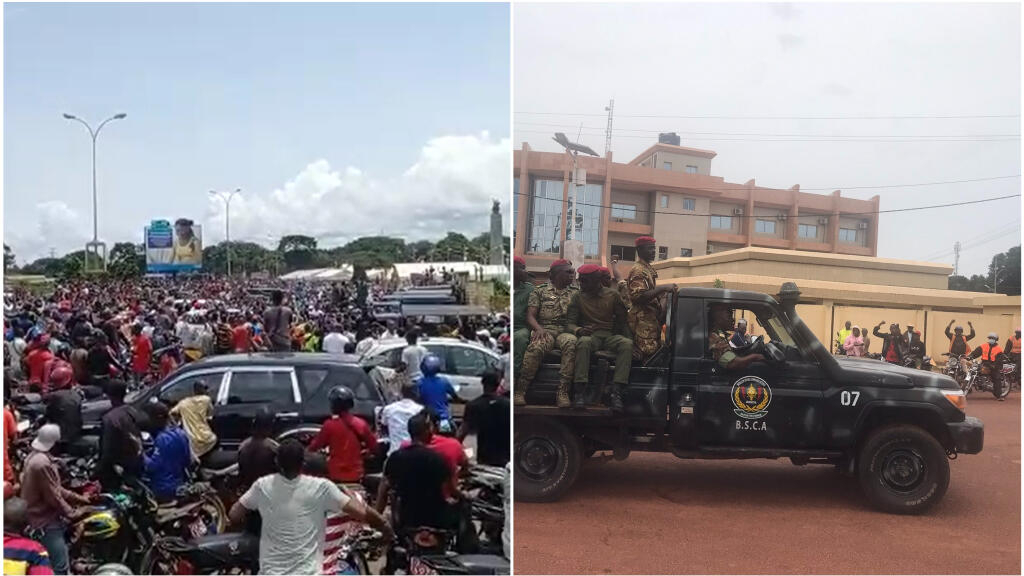 A group of soldiers from the Guinean army’s special forces unit led a mutiny on Sunday September 5, arresting Guinean President Alpha Condé and announcing the “dissolution” of the Constitution and the country’s government. The day after the coup, news of which was greeted with scenes of jubilation in the streets of the capital Conakry, the country seemed to have return to calm. Our Observers in Guinea, however, remain cautious. They spoke to us about their fears for the country’s future.

Soldiers were welcomed in the streets of Conakry on September 5 by thousands of people celebrating the coup, relieved to finally see an end to 11 years of political instability and violence under Alpha Condé’s rule.

That morning, after prolonged gunfire was heard in the Kaloum neighbourhood of Conakry, soldiers shared images on social media of Alpha Condé in captivity. His arrest was made official by the beginning of the afternoon with an announcement on national Guinean television station RTG by the Colonel Mamady Doumbouya, the head of the special forces unit. He declared the dissolution of the country’s constitution.

This tweet from FRANCE 24’s sister organisation RFI says, ‘Colonel Mamady Doumbouya, special forces commander in the Guinean army, announced on national TV and radio channel RTG on September 5 that he had arrested the president Alpha Condé and suspended the Constitution.

“There have been too many deaths for nothing”, he said, making reference to the protests against the new Guinean Constitution, which were put down with violence. The new Constitution was instated by Condé’s government in April 2020 and would have enabled him to stay in power for a third term.

‘We are going to dissolve the institutions. Our government is now dissolved,’ Doumbouya continued. He also promised to enact an ‘inclusive transition’.

>> READ ON THE OBSERVERS: Did police in Guinea fire on protesters?

“We don’t know yet what the soldiers want“

On September 6, Guinea reopened its borders and the soldiers summoned former government ministers and the directors of different institutions in Conakry, who were then banned from leaving the country. Our Observer Thierno Diallo, a member of the Association of Bloggers in Guinea (Ablogui), was in front of the Palace of the People where the meeting happened.

There was an enormous crowd. When I arrived, the building was cordoned off; even when I showed my press card, I couldn’t get in. Soldiers arrived around the building and the crowd applauded.

Now, traffic is back to normal. Some shops have started to open again. During the day, things will gradually start to get back to normal. I also noticed, and I think it’s symbolic, how there aren’t any guards anymore at the roundabouts along the Le Prince road, which is where protests always took place. There are fewer soldiers everywhere than I imagined. Perhaps they’re trying to reassure the population because they’ve understood that there won’t be any resistance.

Personally, I think that it’s too difficult to analyse things as they stand. The country was in a bad way: the country was blocked, the economic situation was very bad, so in a way we were waiting for something like this to happen. But we’re trying to stay cautious. We don’t know yet what they want, and we don’t know what their plan is.

On Le Prince road, running between Bambeto and Hamdallaye in Ratoma commune, our Observer Thierno Diallo was surprised by the lack of soldiers on the road.

“For now, I’m torn between hope and worry“

In Labé, in the north of the country, our Observer Sally Bilaly Sow, a member of the bloggers network AfricTivistes, had a similar reaction to the events.

Yesterday was quite a surprise for Guineans. There had been a sense of hopelessness and a desire for change after President Alpha Condé’s takeover on October 18 last year [his election to a third term]. And now everything has changed in one fell swoop. We understood what was happening a bit better over the course of the day. We could call this coup Coup 2.0, because the soldiers turned to messaging services to inform citizens about what was happening before using traditional media. Photos were first shared in WhatsApp groups and that’s how we found out what was going on.

There were huge scenes of jubilation in Labé, long into the night. When I asked some young people why they were out celebrating, they told me, “We don’t like coups d’état, but if it takes a coup d’état to liberate us from this regime that has gagged us, killed us and impoverished us, then we hope that the soldiers will follow through on their promises”.

This tweet says: ‘With the crowd’s approval, soldiers took control of the town hall and local government in Labé.

No one could believe it: the FNDC’s fight didn’t succeed [the FNDC is a civil protest movement that launched the demonstrations against Condé’s new constitution allowing him to seek election for a third term]. There were hundreds of deaths.

For now, I’m torn between hope and worry. Firstly, hope: I read all of the soldiers’ statements and they’re already talking about an inclusive transition and writing a new Constitution – maybe even bringing back the 2010 Constitution – but also and above all, they’re calling for dialogue and for the country’s diaspora to help rebuild a new state. These are good signs.

But there’s also worry: how is everything going to go down, how will citizens feel – we mustn’t forget the parts of civil society that were already fighting against the prospect of a third term. They have to be involved. We have to stand guard and keep an eye on these soldiers. We have to remember what they promised and make sure they follow through. We can’t create another dictator.