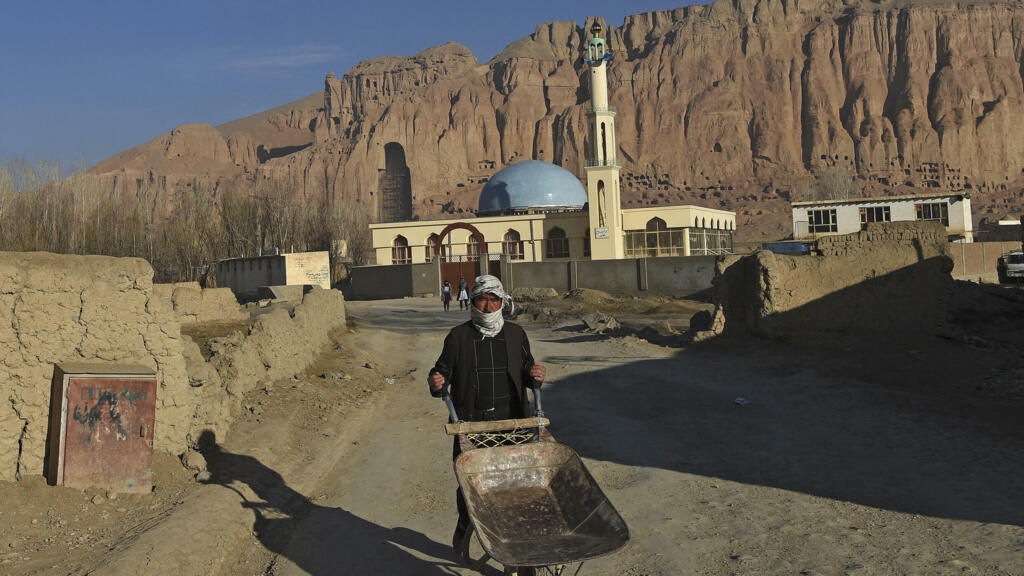 The Taliban may be talking the inclusivity talk, but Afghanistan’s historically marginalised Hazaras are not convinced the hardline Sunni Islamist group is walking the walk on the ground. Last week’s decapitation of a statue of a major Hazara leader killed by the Taliban in 1995 has done little to allay those fears.

When Ali Hussein* saw the photographs on social media of a decapitated statue of an Afghan anti-Taliban leader just days after Kabul fell to the militant Islamist group, his alarm bells immediately went off.

The photographs showed the base of a statue in the central Afghan province of Bamiyan without the seated figure of anti-Taliban resistance leader, Abdul Ali Mazari.

These pictures were sent to me- the Taliban reportedly blew up slain #Hazara leader Abdul Ali Mazari’s statue in Bamiyan. In the 90s they executed him. Given Bamyan Buddhas were blown up & archaeological sites destroyed, is anything being done to protect artefacts? @DalrympleWill pic.twitter.com/TszJUpNuqY


Other images circulating on Twitter showed the head of the turbaned figure lying amid splinters of the stone statue.

In Bamyan of Afghanistan, the Taliban exploded a statue of Abdul Ali Mazari, a leader of Hazara ethnic group who was killed by the Taliban in 1996, said local people. For Hazaras, Mazari is a champion in the long Afghan war. pic.twitter.com/W9QB4FCs5J


Hussein was in the Indian capital, New Delhi, when the Taliban took control of Kabul on Sunday, August 15. But as a member of the historically oppressed, predominantly Shiite Hazara ethnic group, he was worried about his family back home in Afghanistan.

The images of the decapitated statue of Mazari, a revered Hazara leader who was tortured and killed by the Taliban in 1995, were a bad sign. “I felt the Taliban had not changed at all. They killed Ali Mazari and now they are doing abusive things with his statue,” said Hussein in a phone interview with FRANCE 24 from New Delhi. “Ali Mazari was a big political figure, he was a leader for us. I was thinking there are worse things to come for us. I wished I could just evacuate my family.”

With the national and international media focused on Kabul, particularly on the desperate scenes at the airport, there were few details of how the statue in Bamiyan was destroyed last week. Many activists and politicians in the Hazara heartland of Bamiyan have switched off their mobile phones following numerous reports of Taliban surveillance and house searches. Those who can be reached have mostly stayed home since the fall of Kabul and comment only on condition of anonymity due to security fears.

“We are not sure who has blown up the statue, but there are different groups of Taliban present here, including some… who are known for their brutality,” a Bamiyan resident told AFP, asking not to be named.

“It’s not clear if the statue was hit by rockets or blown up with dynamite. While the Taliban has not claimed responsibility, it sends a very powerful and symbolic signal because the majority of Hazaras see Mazari as a political leader who was killed while in Taliban captivity,” said Niamatullah Ibrahimi, an international relations professor at La Trobe University, Melbourne.

Twenty years after they blew up the giant Buddha statues that had looked over the Bamiyan Valley for centuries, the Taliban insist they have become more moderate since they last ruled Afghanistan in the 1990s. But for many Afghans, particularly minority groups – such as women and the Hazaras – who endured the worst of the Taliban’s hardline policies in the past, it’s a dangerously low bar.

The Taliban’s reassurances that they will not revert to the bad old ways of the 1990s have failed to assuage the fears of Afghanistan’s Hazara community, according to Ibrahimi.

“The Hazaras are very fearful that the Taliban will likely be reinstating the policies of the 1990s. The Hazaras were important participants in the democratic political process, in civil society and human rights groups,” explained Ibrahimi. “They placed so much faith and trust in the political process, they saw it as a way out of poverty. Now they see everything falling apart.”

An Amnesty International report released Friday of a Taliban massacre of nine Hazara men in the eastern Ghazni province from July 4 to July 6 has further undermined the Taliban’s claims that they have changed.

The gains of democracy

Hailing from the remote, impoverished central Afghan highlands historically known as the Hazarajat, the Hazaras, with their distinctive Mongol features and their embrace of Shiism, have long suffered persecution by Afghanistan’s mostly Sunni Pashtun rulers.

That changed after the 2001 fall of the Taliban, when Afghanistan’s first president, Hamid Karzai, favoured a democratically adept system of coopting ethnic groups in a bid to woo ethnic voter bases.

The loss of political leverage

The Taliban’s repeated statements that democracy is a Western concept and its vague assurances of an inclusive administration “in accordance with Islamic principles” have done little to allay Hazara anxieties, according to Ibrahimi.

“The Taliban has been making noises that they’re ready to form an inclusive government, but they haven’t spelled out what that entails in the past few years and months. This is a group that knows very little and doesn’t write much,” said Ibrahimi. “For Hazaras, the collapse of the government has given them very little leverage as a negotiating power because the Taliban have won militarily.”

The community’s two major leaders, former Afghan vice president Karim Khalili and Mohammad Mohaqiq, were part of a delegation of senior Afghan politicians who were in Pakistan when the Taliban suddenly took control of Kabul after the president, Ashraf Ghani, fled the militant group’s advance.

From his temporary accommodation in New Delhi, where he is awaiting a German visa to start a post-graduate programme at a German university, Hussein refers to Khalili and Mohaqiq as “old guys”.

The 25-year-old post-graduate student was just 5 years old when the Taliban fell in 2001. Born and raised in a predominantly Hazara district in Ghazni province, Hussein has little recollection of life under the previous Taliban regime.

But his parents and elder siblings have vivid memories of the Taliban forcing the boys to wear turbans and closing the girls’ schools. “My brothers and sisters are trying to get out of Afghanistan by trying to cross the borders into Pakistan and Iran, but the borders are closed. When I left Afghanistan in July, I left assuming the situation would get worse; when my parents said goodbye, they were saying perhaps it’s our last goodbye. But I didn’t expect the country to collapse so speedily – nobody did. Now I’m just worried. I spend my days and nights trying to get people out of Afghanistan. I fear life will get very restrictive and I live in real fear of what’s awaiting the Hazaras back home.”