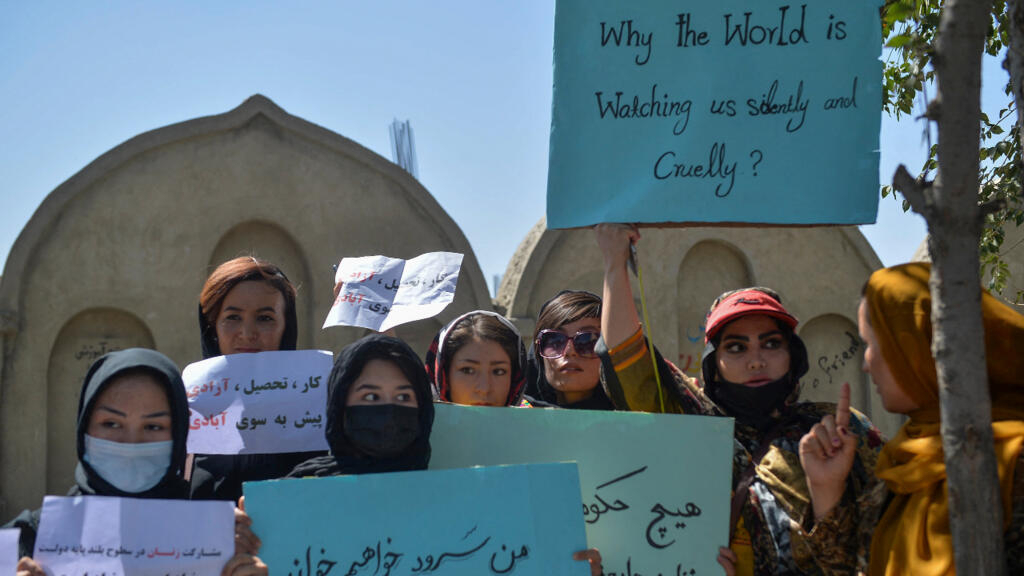 Despite their promises of a “moderate” rule, the Taliban have announced the first measures on women’s rights on Wednesday, a day after announcing their government. Among them, the end of mixed classes in universities and a ban on sports for Afghan women. Many took to the streets to denounce the worrying measures, only to be met with violent repression.

Shouting “Freedom, freedom” and “Resistance”, anti-Taliban demonstrators took to the streets of several Afghan cities once again on September 8, as they had sporadically since the group rose to power on August 15. On the front line were activists, but also dozens of Afghan women claiming the preservation of their rights and their freedom.

The previous day, the Taliban unveiled their interim government. And despite promises of an “inclusive” cabinet, no women were featured on the list. “When the government was announced, things became clear: women will not be present in politics and there will be no tolerance,” a Kabul demonstrator told FRANCE 24.

‘They can’t erase us from society’

“We are on the streets in order to maintain our basic rights: rights to education, to work and to political participation. We want to make the Taliban understand that they cannot erase us from society,” a young woman in Kabul said a few days earlier, as reported by the NGO Human Rights Watch.

Since returning to power, the Taliban have tried to show a more tolerant face to the world. But many women fear nevertheless a return to the past: under the first Taliban rule (1996-2001), they vanished from the public space, girls were denied education, women were not allowed to work nor to go out in the streets without a male member of their close family. They also had to wear a burqa covering the whole body.

“Most of these demonstrators are students, women in their twenties who didn’t experience the previous Taliban regime, and who refuse the idea of going back to it,” Mahbouba Seraj, an activist based in Kabul, told FRANCE 24.

“These young people do not really understand the terror of the Taliban. They are showing a lot of courage by daring to defy them, but above all they have the will to show that they do not want to become second-class citizens,” Jean-Charles Jauffret, professor emeritus of contemporary history at Sciences-Po Aix, told FRANCE 24.

Drawing the curtains at universities

Concern has only grown since the Taliban’s return and already the Islamists have in fact announced several restrictions against women. On September 5, the eve of the reopening of private universities, they published a decree on female university students.

Students across Afghanistan have started returning to university for the first time since the Taliban stormed to power, and in some cases females have been separated from their male peers by curtains or boards down the middle of the classroom https://t.co/evBeUMDynp pic.twitter.com/5H9guTycbZ


In order to attend classes, women will now have to wear an abaya, a veil covering their whole body, as well as a niqab, which only shows their eyes.

In addition, mixed classrooms will now be divided by a curtain, with women on one side and men on the other, as images widely shared on social media have shown. At the end of every class, female students have to wait for men to leave the room before going out.

As for teachers, “universities are required to recruit female teachers for female students based on their facilities,” the decree said. If it is not possible to hire women teachers, then colleges and universities “should try to hire old male teachers who have a good record of behaviour”.

“All these rules are designed to discourage [women] from enrolling in university,” says Jean-Charles Jauffret.

But on Saturday, about 300 Afghan women rallied near Kabul’s university, pledging commitment to the Taliban’s gender segregation policies, all wearing full face veils in accordance with the strict new dress policies for education. They waved Taliban flags as speakers railed against the West and expressed support for the Islamists’ policies, on September 11, the 20th anniversary of the 9/11 attacks that sparked the American invasion of Afghanistan.

Daud Haqqani, director of foreign relations at the education ministry, said the protest was organised by the women, who had asked and been granted permission to demonstrate.

The pro-Taliban march took place days after the hardliners announced on Wednesday that any gathering is now forbidden unless authorised in advance by the Ministry of Justice… after violently putting down opposition demonstrations.

“We are against those women who are protesting on the streets, claiming they are representative of women,” said one speaker, covered head to toe. “Is it freedom to like the last government? No, it is not freedom. The last government were misusing women. They were recruiting women just by their beauty.”


Confusion over ban on sports

On September 8, Ahmadullah Wasiq, a Taliban cultural commission official, announced that women will now be banned from sports. The reason given was that sportswomen’s outfits would expose too much of their bodies.

“They might face a situation where their face and body will not be covered. Islam does not allow women to be seen like this. It is the media era, and there will be photos and videos, and then people watch it,” Wasiq told Australia’s SBS News when asked about the country’s cricket team. “Islam and the Islamic Emirate do not allow women to play cricket or play the kind of sports where they get exposed.”

In addition, several other similar issues remain unresolved. Among them, the right for women to go out in public without being accompanied by a man, or their freedom to work. “We are in a complete limbo,” Mahbouba Seraj regretted.

“We have a lot of different stories coming in, telling anything and everything. In some regions, the police forbade women to go to work, but that is not the case everywhere,” the activist added. “In reality, we feel like we are in an in-between situation and we don’t know what will really happen to our freedom.”

Afghanistan’s Cricket Board also added to the confusion. Its chairman Azizullah Fazli has claimed women would be allowed to play cricket, in an apparent reverse on the Taliban’s hardliner stance. “We will give you our clear position on how we will allow women to play cricket,” he told SBS Radio Pashto late Friday. “Very soon, we will give you good news on how we will proceed.”

When the Taliban unveiled their interim government on Tuesday, they also announced the return of the Ministry for the Propagation of Virtue and the Prevention of Vice. During the organisation’s first government, the institution was responsible for implementing a strict interpretation of the Islamic law. Its agents patrolled the streets, forcing shops to close at prayer time, beating those who listened to loud music and banning girls from school. The return of the feared ministry has further shattered the hopes of a tolerant government.

Any ‘insurgency will be hit hard’

While some women have decided to take their courage in both hands to challenge the Taliban, Mahbouba Seraj has decided to stay away from the demonstrations. At 70, this long-term activist refuses to take part in the marches. “The young women who take to the streets are full of courage, but are also so naive,” she said. “I am not at all optimistic about our rights. But right now, I am especially afraid that these demonstrations will only lead to a harsher crackdown and lives lost”, she said, calling on members of civil society “to coordinate and think about a movement that will have a real international impact”.

Echoing the activist’s fears, the Islamist hardliners’ chief spokesman warned against any further attempts to rise up against their rule: “Anyone who tries to start an insurgency will be hit hard. We will not allow another,” Zabihullah Mujahid said at a press conference in Kabul, after claiming victory over Panjshir rebels on Monday.

All of which doesn’t bode well for any future protests by women – unless, of course, they are pro-Taliban ones.